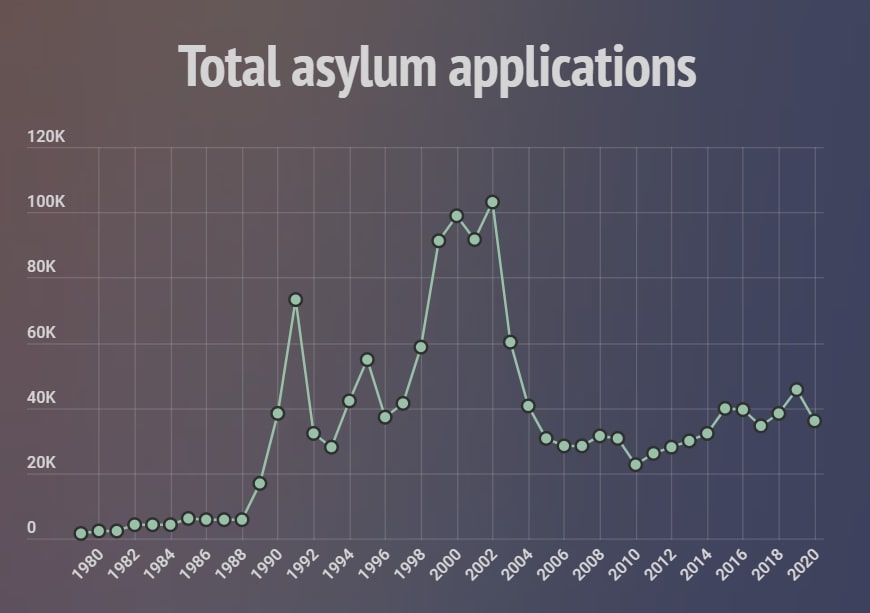 Refugee Week: asylum in the UK, by numbers

This week is Refugee Week. From 14-20 June 2021, the UK celebrates the contribution of refugees and promotes better understanding of why people seek sanctuary.

The infographic above draws on government figures to illustrate some trends in asylum in the UK. Most of the data comes from the latest government immigration statistics, which are validated by the independent Office for National Statistics. What follows is a bit more information about what the graphs and charts show.

Facts and figures are, of course, no substitute for the human stories of refugees. Check out the Refugee Week website for (mostly online) events.

Those who want the protection of the UK government, having fled persecution in their country of origin, must apply to the Home Office for recognition as a refugee. The UK government is no soft touch when it comes to asylum decisions: traditionally around two thirds are refused.

That said, the last couple of years have bucked the trend. In 2019 and 2020, around half of asylum applicants were granted refugee status or another form of legal protection in the UK at the first time of asking. The average for the period 2010-2018 was about 35%. (The European Union average last year was 41%.)

Many of these decisions to refuse asylum turn out to have been wrong. Immigration judges routinely allow thousands of appeals every year. As the infographic shows, the proportion of successful First-tier Tribunal appeals has been rising, from a low of 29% in 2010/11 to 49% in 2020/21 (data is for financial years running from March to March).

Once the initial grants of asylum are combined with the wins on appeal, a clear majority of asylum seekers become recognised refugees or get a similar status such as humanitarian protection. A conservative figure is the Home Office’s own, for 2019: 64%.

In 2020, almost 30,000 people applied for asylum in the UK (not including dependent family members). This is well below the level in 2019, despite the well-documented increase in the number of people arriving across the Channel by boat.

A good chunk — 46% — were from the five countries mentioned in the infographic: Iran, Albania, Eritrea, Iraq, Sudan. Other significant “countries of origin” include Afghanistan, Vietnam, Pakistan and Syria.

The chart at the bottom of the infographic shows how things have changed over the past few years. Some shifts can be dramatic: in 2013, Sri Lanka was in the top five, but now ranks 20th.

The list of nationalities actually granted refugee status can look very different. Only a handful of Indians are successful in claiming asylum, for example, at least before appeal. By contrast, most Eritreans and Syrians are granted asylum.

Even by UK standards, the number of asylum seekers today is not particularly high. As the chart above shows, numbers peaked around the turn of the century — over 100,000 in 2002, if dependants were included — and have been fairly steady in recent years. The average over the past five years has been 39,000, well under half the average for the peak years around the year 2000.

All the discussion so far has been of asylum seekers who made their own way to the UK and were granted (or refused) refugee status. But some refugees are brought directly into the UK. This is known as resettlement. The Home Office’s contribution to Refugee Week has been to emphasise that resettlement is good and coming to the UK under your own steam (“jumping the queue”) is bad.

They left Iraq when their father was assassinated.
Today they work in @marksandspencer in Coventry.
They dream of becoming doctors in the @NHSuk.
This is Juman & Dalya’s story.
This is our #NewPlanForImmigration.

The reality is that such programmes, which have been on hiatus throughout the pandemic, do not represent a “queue” which asylum seekers considering a journey to the UK ought simply to join and wait their turn. Over the past five years, the UK has resettled around 26,000 refugees, including 20,000 Syrians. (This looks impressive by European standards but most EU countries receive far higher numbers of in-country asylum seekers.) The United Nations estimates that there are 26 million refugees around the world.

Refugees hoping to be resettled also cannot apply directly for resettlement in the UK. The UN Refugee Agency in Iraq, for example, is up front about this (“refugees cannot apply for resettlement”). Instead they must hope to one day be pulled out of the pile of registered refugees, like The Claw scooping up the baby aliens in Toy Story, and assigned to a resettlement programme (not in a country of their choice). There is, in other words, no queue to join.

The UK’s main resettlement programme over the past few years has targeted Syrians living in camps in the region. David Cameron promised to resettle 20,000 vulnerable Syrians between 2015 and 2020, a target reflected in the nationality breakdown of refugee resettlement shown in the graphic. That target was met in early 2021.

To mark Refugee Week in 2019, the Home Secretary announced a new resettlement programme bringing in about 5,000 people a year. It has not yet materialised, and hardly any refugees have been resettled since the pandemic began.