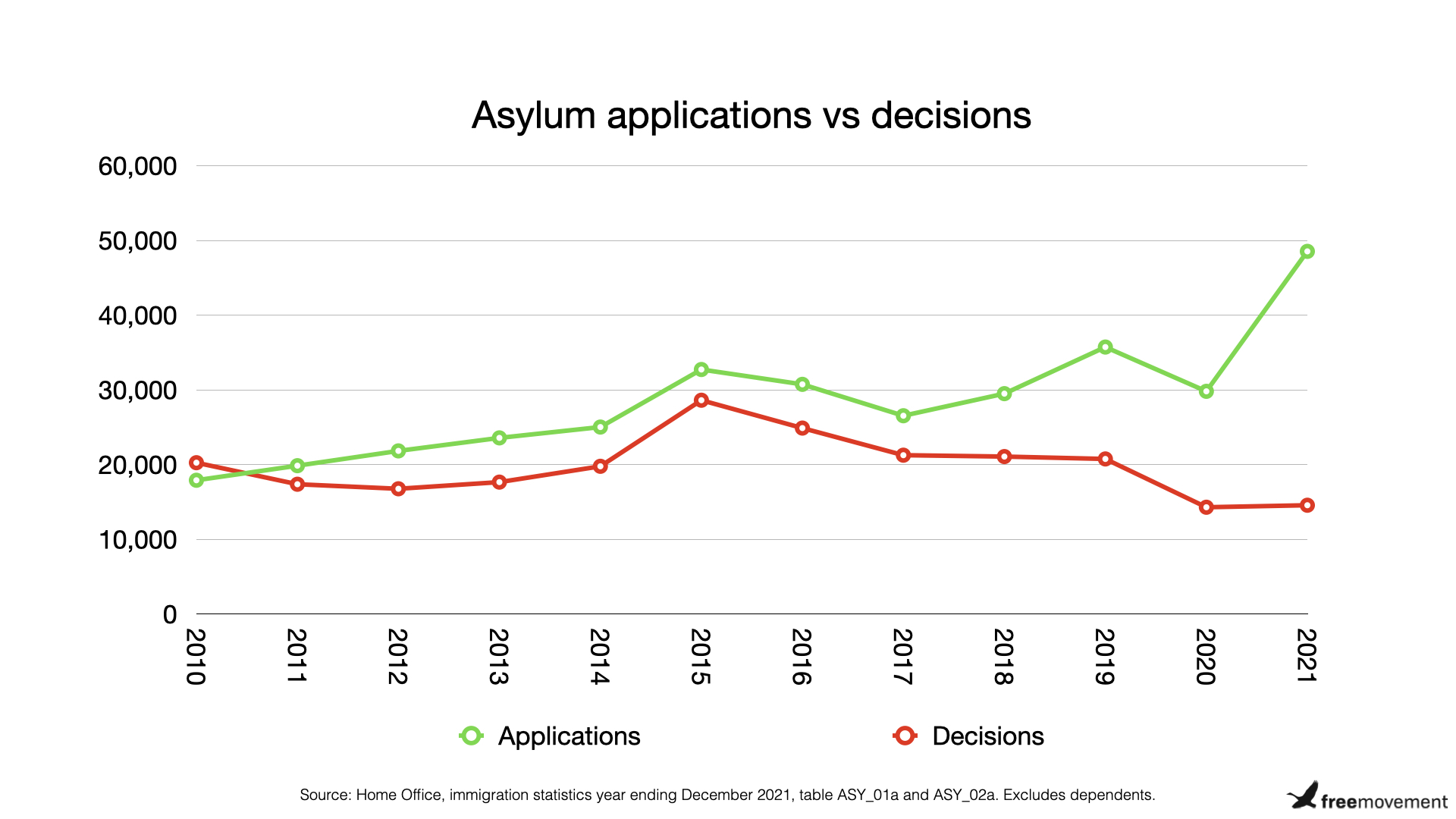 Briefing: the (sorry) state of the UK asylum system

In this short briefing we will take a look at the whole of the process, from the numbers claiming asylum to the decision-making process, the cost of the system, the volume and quality of decisions, the outcomes of appeals, the use of detention and the number of removals. The information is drawn mainly from the quarterly immigration statistics and transparency data for the year ended December 2021, the most recent available at the time of writing.

The time periods for some of the charts are different. The longest possible range has been used where provided in the data charts.

Following a significant peak in 2002, the number of asylum applications made in the United Kingdom was fairly stable between 2005 and 2020. The Syrian refugee crisis beginning in 2014 caused a slight rise in overall numbers.

The number of asylum applications increased significantly in 2021, however. This was largely due to increasing numbers of arrival by means of small boats, particularly in the final months of 2021.

The shrinking area of green for 2020 and 2021 on the chart reflects the fact that the increase in small boat arrivals in large part represented a change of route by asylum seekers. Previously, lorries had been the principal means of entry to claim asylum.

Arguably the stand out problem of the asylum system today is the time it takes for decisions to be made. This is a recent development. The backlog of asylum seekers waiting more than six months for a decision to be made on their case has trebled since Priti Patel took over as Home Secretary in 2019. While the pandemic might have made the issue harder to remedy, the trend began long before it began. It looks like an example of failing to mend one’s roof while the sun shines.

This is not the whole story. Firstly, there is currently a 20 week wait to even register an asylum claim. It is only after the claim is registered that the case will appear in this data on delays. So the delays are actually much longer than they appear from the official statistics. Secondly, the chart above does not tell us what the total number of cases awaiting an initial decision actually is. At the end of 2021, the latest data available, there was a backlog of 83, 535 cases awaiting an initial decision for asylum claims made since 2006. That number has quadrupled since the end of 2016.

The reason for the growing delays appears to be straightforward: fewer decisions are being made and the number of asylum claims has increased.

The percentage of cases on which a decision is being made within 6 months has declined drastically since 2014.

This is despite an increase in staffing levels.

This has also led to more asylum seekers being provided with support during their claim. Asylum seekers are not permitted to work so they are generally forced to rely on government support for the duration of their claim. As we can see, the numbers in receipt of emergency and initial asylum support have increased considerably in recent years.

Increasing numbers of asylum seekers waiting for decisions means additional short term costs to the taxpayer. It also probably means longer term costs as well, because the longer a person is out of work the harder it is for them to re-enter the labour market. The majority of these asylum seekers will ultimately be recognised as refugees and allowed to remain in the United Kingdom long term. This is a terrible beginning to their new lives here in this country.

In 2021, 72% of initial asylum decisions by the Home Office were grants of protection. That is an historic high not seen since since the 1980s, when there were far fewer asylum claims being made.

The success rate for some nationalities is very high indeed:

This is how the decisions break down into grants of refugee status, other grants of protection and refusal.

Not only that, but some of those asylum seekers refused protection by the Home Office will go on to win their appeals. We might expect the appeal success rate to fall somewhat as the initial application success rises but there is no evidence of that happening yet.

The average time it takes for the First-tier Tribunal to decide an asylum case was 48 weeks in the period July to September 2021 (table T_3 in the quarterly tribunal statistics). This is up from 29 weeks prior to the pandemic.

The number of people being held in detention at any one time has fallen in recent years. The number who enter and therefore experience detention has, aside from the year of maximum impact of the pandemic, remained fairly stead at 25,000 per year. What has changed is that the percentage of those experiencing immigration detention who are asylum seekers has increased markedly, from around 50% to around 80%.

These figures do not include those detained at the de facto detention camps at Penally and Napier barracks, from which asylum seekers were allegedly free to come and go.

Immigration detention is supposed to be for the purpose of removing those with no permission to remain in the United Kingdom. Immigration detention centres are formally called ‘removal’ centres. However, the number of detainees leaving detention to be removed from the country has fallen drastically. The majority are now released into the community.

This calls into question whether a decision to detain these people was the right one. The cost of holding a person in immigration detention is around £90 per day.

The full figures on how long people had been detained at the date at which they were released is as follows:

A total of 3,272 people had been held for over 28 days at the time of their release in 2021. These figures do not capture repeat immigration detention. From my occasional work for the charity Bail for Immigration Detainees I am aware that many in immigration detention have experienced repeated periods of detention, sometimes over many years. By definition, these individuals have been detained and repeatedly released into the community, again raising the question of whether it was appropriate to detention them at all.

Very few asylum seekers have been removed or voluntarily departed from the UK in recent years. First of all, we can see from the overall numbers that there has been an overall decline for all enforced removals and voluntary departures. This includes foreign national offenders, overstayers and former asylum seekers:

Once former asylum seekers are separated out, we can see that only a very small number are being removed: just 203 in the whole of 2021.

The reality is that even those who lose their asylum cases — an increasingly small minority — are likely to remain in the United Kingdom in the long term.