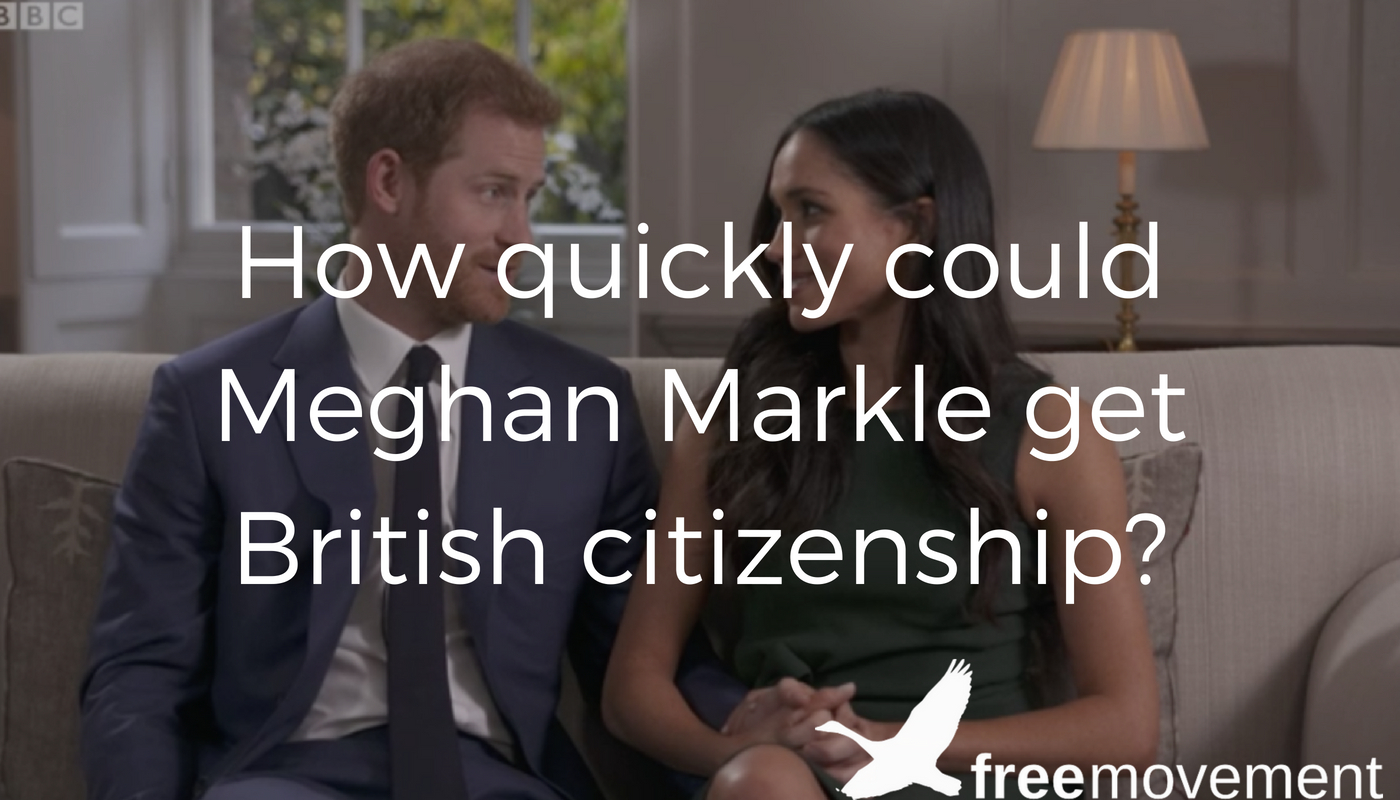 How quickly could Meghan Markle get British citizenship and what are the requirements?

So, the Royal Wedding approaches. But once the bunting is bought, the flags are flown and the merchandise marketed, what happens next for Meghan Markle and Prince Harry? Will they live happily ever after and, if so, where and with what visa? Princes and princesses often seem to come from adjacent realms, presumably with their own sets of immigration rules, but Disney never seems to explore the immigration control side of things for some reason.

In the case of Ms Markle, the BBC reports that

the American actress intends to become a British citizen and will work towards it in the coming years.

Similarly, the Daily Mail suggests that Ms Markle will become British after the wedding and that the process will take “a number of years”, with no attempt to circumvent the usual rules on becoming British.

Here we take a look at the British citizenship rules that normally apply, what rules can be waived in special cases, how long the whole thing might take and how much it might cost.

One of the absolute and unwaivable requirements for acquiring British citizenship through naturalisation as the spouse of a British citizen is that the applicant is settled at the date of application. This requirement is imposed by paragraph 3(c) of Schedule 1 of the British Nationality Act 1981:

that on the date of the application he was not subject under the immigration laws to any restriction on the period for which he might remain in the United Kingdom.

The normal way to meet this requirement for a US citizen is to be granted indefinite leave to remain (ILR). EU nationals can instead have permanent residence and long-term resident Commonwealth citizens like the Windrush cases can show they have the right of abode.

It would normally take a US citizen marrying a British person five years to become settled and therefore become eligible to apply for naturalisation.

For most foreign nationals marrying a British citizen, the first step is to get a spouse visa. This is normally applied for from abroad after the wedding. But if entering as a fiancé(e) for the purpose of getting married in the UK an application can be made from within the UK, as we discussed in an earlier entry in our Royal Wedding Series.

We do not know whether Meghan Markle is entering as a fiancée under the normal rules or whether the usual requirements are being waived for her. Home Office officials do have the power to grant entry outside the normal rules.

The requirements for a spouse visa include demonstrating that the British citizen sponsor, in this case Prince Harry, has plenty of money in the form of either

There is a language test but this is not applied to US citizens or citizens of some other majority English speaking countries.

A sham marriage is one undertaken for immigration advantage. All couples need to show that the relationship is a “genuine and subsisting” one. To do so, they need to send in proof such as

One might have thought press coverage would suffice in this case.

As one of our contributors found, the application is a stressful experience for mere mortals, even ones who are themselves immigration lawyers.

B. Get another visa

The initial visa only gets the applicant halfway to the point at which they can apply for settlement, though. After two and a half years, a visa extension application has to be made.

Normally it is five years from initial entry as a spouse before a foreign national married to a British citizen can apply for settlement. This five-year requirement was introduced in 2012; prior to that the requirement was two years, and before 2002 it was one year.

The proof for the extension application is basically the same as for the initial spouse visa and the fee is a further £2,223.

Once Ms Markle has achieved five years of residence, then she can finally apply for settlement, also known as indefinite leave to remain or ILR. The premium service application costs £2,999.

So far the likely total cost, assuming in-country applications using the premium service, is £7,445. That is before adding legal fees.

D. Or skip all that nonsense

The requirements for naturalising as a British citizen are set out in an Act of Parliament, the British Nationality Act 1981. Some of those requirements are fixed and cannot be waived. Visas and immigration status are different. These are governed by the Immigration Rules and officials are allowed to grant leave to enter or remain outside the rules even when the normal requirements are not met.

It is therefore perfectly possible for Ms Markle just to be granted indefinite leave to remain straight out. Advance To Pall Mall, so to speak.

Given that the Palace says she does not want special treatment, that seems unlikely. But it must be tempting.

Once Ms Markle is settled or otherwise meets the requirements of paragraph 3(c) of Schedule 2 of the British Nationality Act 1981, then she can apply to naturalise as British. If she receives no special treatment and goes through the same process as anyone else, as outlined above, it will have taken her five years to get to this point.

Some media outlets have reported that it will take three years for Ms Markle to be eligible to apply. This is a mistake, albeit an understandable one.

Can Meghan Markle apply for citizenship after three years?

The British Nationality Act 1981 says that a spouse of a British citizen can apply to naturalise after three years of lawful residence.

However, the Act also says, as we’ve discussed above, that the spouse has to be settled at the date of application. Back in the day, it took one then later two years to get settled, so the requirement of three years residence before naturalisation was meaningful. Since the minimum eligibility for settlement increased to five years in family cases in 2012, the three years before naturalisation has been meaningless because the spouse will not meet the settlement requirement and therefore cannot yet apply at that point.

The cost for making an application to naturalise as a British citizen is £1,330. So the whole shebang, counting the cost of settlement and then naturalisation applications, will be £8,775 before legal costs. That is at today’s prices: immigration fees increase every year so the total will end up being higher than that.

Requirements for naturalisation which cannot be waived

As we have seen, the requirement to be settled at the date of application is not one that can be waived. Given that it takes five years to acquire settlement, this usually means it will be five years of living in the UK before a person can apply to naturalise.

One other thing Ms Markle will need to watch out for is that she was physically present in the UK exactly three years to the day before she makes her application for naturalisation. The Home Office has always interpreted the British Nationality Act 1981 as imposing this requirement.

Lastly, Ms Markle will need to show she is of good character. This is another absolute requirement imposed by the British Nationality Act. There is no suggestion that this will present any problem at all. We have previously taken a detailed look at the good character requirements if you are interested, though.

Requirements for naturalisation which can be waived

There are other criteria for naturalisation as a British citizen but all of these can potentially be waived by officials. Whether they will be in the case of Ms Markle remains to be seen. Decisions to waive the normal requirements are not taken lightly and officials very closely follow a series of guidance documents.

Normally, a spouse of a British citizen needs to show he or she has lived mainly in the UK during the qualifying period. The basic rule, set out in Schedule 1 of the British Nationality Act 1981, is that the applicant must not have been outside the UK for more than a total of

This could be a problem. Ms Markle has given up a starring role in TV legal drama Suits but has not, as far as I know, said she is giving up her career altogether. The royal lifestyle is anyway a somewhat international, peripatetic one involving Good Works, sunbathing and so on around the world. It may well prove to be the case that Ms Markle ends up spending quite a lot of time outside the UK.

Perhaps luckily for Ms Markle, the British Nationality Act authorises officials to exercise discretion to waive absences in excess of 270 days. For any exercise of discretion where the absences exceed 300 days in total, Home Office policy states that the applicant must show they have “established their home, employment, family and finances in the UK”.

There are then other criteria applied depending on the extent of the excess absences:

The most relevant of the potential reasons to exercise discretion is highlighted in bold: the unavoidable nature of the applicant’s career. I can imagine some room for disagreement on this, but it is arguable that being a member of the royal family is akin to a career.

Another possible reason for applying discretion, Crown Service, is given a specific definition in the guidance and Ms Markle would probably not satisfy that definition:

An applicant is in Crown service if they are:

Honorary appointments, such as legal adviser to a British Embassy or High Commission, may be included on this definition.

Ms Markle has said she does not want special treatment. Realistically, an international celebrity marrying a British citizen and mainly basing themselves in the UK but being abroad a lot for work reasons would normally be given special treatment. In fairness, the same flexible approach should be applied to Ms Markle. It would be absurd if she were effectively grounded in the UK, unable to see her family and unable to accompany her prince abroad, by the naturalisation residence requirements.

The same is of course true for others who are not celebrities; there are some dubiously flexible standards in play here, but they are not of Ms Markle’s making.

Remember, as well as the 270 days absence rule for the three year period, there is an additional requirement that absences from the UK do not exceed 90 days in the final year. The guidance says that this requirement will be waived in these circumstances:

Again, the rule that Ms Markle be outside the UK for no more than 90 days in the final year before she applies for naturalisation as a British citizen could cause problems. It might well be said by some that there were exceptional circumstances but it is not clear exactly what they might be.

The qualifying residence is also supposed to be lawful, although this requirement can also be waived. The Home Office say they will never waive the requirement where a breach of immigration laws was “both substantial and deliberate”.

No doubt Ms Markle has very good lawyers and they will make sure this is not a problem.

This material is mainly drawn from the Free Movement ebook “Naturalising as a British citizen: a guide“. The ebook contains worked examples of common residence requirement issues in naturalisation applications, as well as covering the rest of the naturalisation criteria. It is available to download free to members, or for £9.99 for non-members.