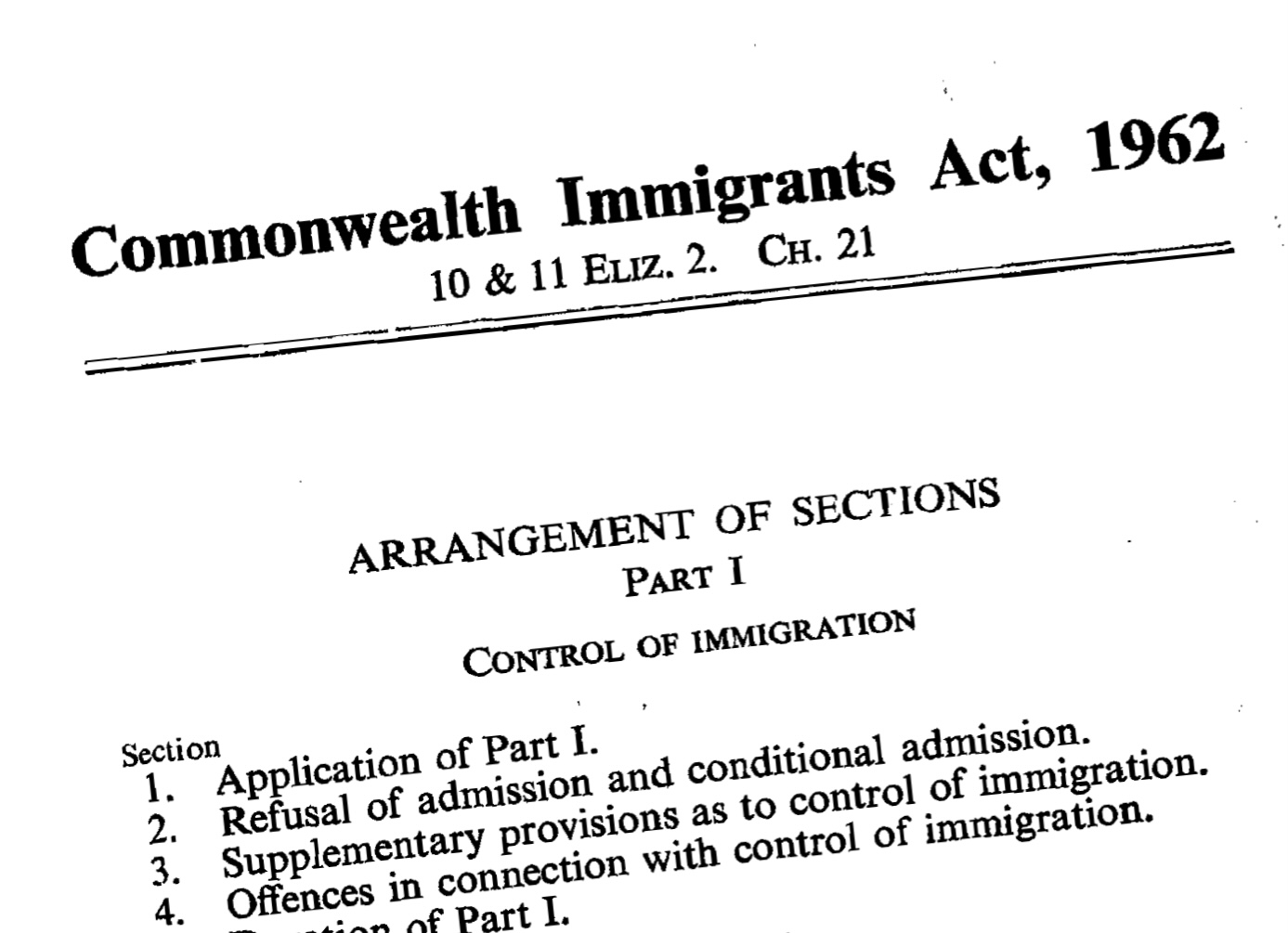 On this day 60 years ago, the first Commonwealth Immigrants Act came into effect

On 1 July 1962, sixty years ago today, the Commonwealth Immigrants Act 1962 came into effect. It is hard to overstate the importance of this landmark legislation.

Aliens were already subject to a separate, full system of immigration control under the Aliens Restriction Acts 1914 and 1919 and the Aliens Orders made under them. For the first time, British subjects became subject to immigration control, preventing them from entering and residing in their country of nationality. The British subjects affected were mainly — but not exclusively — the racialised people of the Commonwealth.

This was a matter of deliberate policy. Migration of white British subjects and indeed white Irish citizens was considered positively desirable. Home Secretary Rab Butler wrote in a memorandum during the planning for the Act that the “great merit” of the proposed approach to control was that it could be presented as non-discriminatory whereas in reality “its restrictive effect is intended to, and would in fact, operate on coloured people almost exclusively”.

The mechanism of control for British subjects — the legal means by which the right to enter would be determined — the government settled upon was bizarre. Normally, we would expect a right of entry and residence to be attached to nationality. Nationals may enter, foreign nationals may not. It was not possible to use that mechanism, though, unless British nationality law was entirely re-written.

An historically important decision was then made, with virtually no thought to the consequences: to group residents of the United Kingdom itself with residents of the colonies. Creating separate citizenships for each colony was considered to be too cumbersome. Their collective status would be ‘citizens of the United Kingdom and Colonies’, by means of which they were also British subjects. Passports would be issued bearing this citizenship title.

The British Nationality Act 1948 therefore recognised three different forms of nationality status. The principal status was that of the British subject. But there were also, sitting below that as qualifying sub-classes, citizens of independent Commonwealth countries and citizens of the United Kingdom and Colonies.

The government could fairly easily and defensibly allow entry by citizens of the United Kingdom and Colonies but impose control on independent Commonwealth citizens. By the time the 1962 Act came into force, this would have excluded citizens of Ghana, India, Pakistan and Sri Lanka, for example. This was considered desirable by policymakers. It would also have excluded citizens of Australia, Canada, New Zealand and South Africa, amongst other countries. This was considered undesirable. But it would not have excluded the entry of residents of the remaining colonies, which in 1962 still included a lot of countries. This was because they were still citizens of the United Kingdom and Colonies.

There were also a lot of residents of independent Commonwealth countries that had been excluded from citizenship of the newly independent Commonwealth countries but were still ‘British subjects without citizenship’ or citizens of the United Kingdom and Colonies under the scheme of the 1948 legislation. They would potentially be entitled to enter as well.

The government was unwilling to contemplate re-writing the scheme of the British Nationality Act 1948 so soon after its passage and was aware that doing so would cause serious ructions within the Commonwealth. So, determined to press ahead with some form of immigration control, ministers needed to find some other legal mechanism for excluding racialised residents of the colonies.

A ‘passport’ was defined as ‘a current passport’ and a ‘United Kingdom passport’ as ‘a passport issued to the holder by the Government of the United Kingdom, not being a passport so issued on behalf of the Government of any part of the Commonwealth outside the United Kingdom’. Comprehension of what this meant in practice requires the modern reader to understand that independent Commonwealth countries had their own governments, perhaps self-evidently, but so too did the British colonies. Classified at the time as Crown colonies (British Dependent Territories after 1981), some were governed by representative councils where one of the legislative chambers was Crown-appointed and the other elected, some had entirely Crown-nominated councils and some were ruled directly by the Crown-appointed governor.

This scheme prevented some citizens — citizens of the United Kingdom and Colonies — from travelling to or residing in their own country of citizenship: the United Kingdom. The right of residence became divorced from citizenship for the next forty years. It was a peculiar way to control the right of entry, and it was very far from a complete system of immigration control.

In some respects this basic mechanism of control was more extensive than that adopted on a more permanent basis by the later Immigration Act 1971; the child of a British subject who had migrated from the United Kingdom to a Commonwealth country was not automatically eligible for entry under the 1962 legislation but was automatically eligible as a patrial under the 1971 law. In reality, immigration officers are reported to have routinely admitted white Commonwealth citizens in the intervening years in any event, relying on their discretion to do so.

There were five categories of deliberate exception from control for those in possession of a passport issued by a colonial authority. These were for those already resident in the United Kingdom, family members of any nationality and those in possession of a work permit, seeking entry or study or who were self sufficient. There were also unofficial but lawful ways of avoiding controls for those sufficiently alive to the new legal framework.

Firstly, a British subject who could satisfy an immigration officer on entry that they were ordinarily resident in the United Kingdom or had been ordinarily resident within the last two years could not be refused entry. The burden of proof lay with the person seeking entry, which might prove problematic in practice. ‘Ordinary residence’ was defined as excluding residence under a temporal restriction but was otherwise unclear and the subject of litigation. Further, the requirement was a permanent one, in that no fixed period of residence would lead to an exemption from control akin to permanent residence.

Wives and children under the age of 16 of all British subjects were also exempt from control, providing the British subject in question was not being refused entry on the same occasion. Children were defined to include a stepchild, adopted child and ‘in relation to the mother, an illegitimate child’. This provision of the legislation created a statutory right of admission for wives and children which was to last until 1988, although it had been somewhat abrogated by entry clearance requirements imposed from 1969 onwards. No equivalent provision was made for husbands, leading to a finding of gender discrimination in the case of Abdulaziz.

A worker voucher scheme for British subjects was introduced and the holder of such a voucher was exempt from control. The details of the scheme were not dictated by the legislation and could be — and were — amended by the government at will. Three categories of voucher were initially envisaged and subsequently issued. Category A vouchers were for those offered a specific job by a  specific employer. Category B vouchers were for skilled individuals. Category C vouchers were for the unskilled. A quota was initially set of 20,800 vouchers in Category A and B combined and a quota of 10,000 per year for Category C vouchers. It was expected that it would be citizens from ‘old Commonwealth’ — a euphemism for those with white skin — who qualified for the Category A and B vouchers. The quotes were rapidly over the course of the next few years.

A voucher carried with it an effective right of permanent settlement, subject to the possibility of deportation for the first five years if convicted of a qualifying offence. There was also no monitoring after entry. In these respects, the voucher system was distinct from the work permit scheme later introduced under rules made under the Immigration Act 1971. Context to Heath’s pledge in 1967 to end permanent primary migration and manifestos commitment to make work permits temporary in nature.

Students, defined as those wishing to enter the country for the purpose of attending a course of study which would occupy ‘the whole or a substantial part of their time’ at any university, college, school or other institution, could also be admitted.

The final exemption was for the independently wealthy who were able to show they were in a position to support themselves and any dependants ‘otherwise than by taking employment or engaging for reward in any business, profession or other occupation’. Later incorporated into immigration rules applicable to aliens and Commonwealth citizens as the ‘retired person of independent means’ category, entry on this basis was eventually abolished in 2008.

Any of those who might benefit from these exceptions could still be refused entry on medical grounds, including suffering from a mental disorder, if they had been convicted of an extraditable crime or where entry would in the Home Secretary’s view ‘be contrary to the interests of national security’.

A power to deport British subjects was also conferred by the legislation for the first time. Any person subject to control who was over the age of 17 and had been convicted of an offence punishable by imprisonment was potentially liable to deportation on the recommendation of a court.

These criteria differed markedly from those in successive Aliens Orders, which hinged on the judgment of the Home Secretary as to whether a person’s deportation was conducive to the public good. It was only under the Immigration Act 1971 that British subjects became liable to discretionary deportation by the Home Secretary. Procedural safeguards were made in respect of recommendations for deportation, including a notice requirement and a right of appeal.

Continuous ordinary residence of more than five years in the United Kingdom rendered a person exempt from deportation as well as exempting the person from control on entry. With no requirement for British subjects to possess permission to live in the United Kingdom, this five year period became the nearest equivalent to a right of permanent residence, albeit one that could be lost by absence abroad.

Entering the United Kingdom while still subject to a deportation order was criminalised and this was also specified to form grounds for refusal of entry.

What was absent from the legislation?

The immigration control scheme introduced by the Commonwealth Immigrants Act 1962 was very far from complete.

The most notable omission was that no restrictions were placed on migration from Ireland. The first draft of the legislation had in fact subjected the Irish to control but this was abandoned during passage of the legislation on the basis that it would be impossible to manage the Irish land border. The fact that actual British subjects and citizens of the United Kingdom and Colonies who were racialised were excluded from entry but the citizens of a non-Commonwealth who were mainly white were not added weight to accusations that the legislation was racist.

Secondly, no requirement to possess permission to reside was imposed by the 1962 Act. A person seeking entry who was encountered by an immigration officer had to comply with control measures otherwise they could be refused entry, detained and removed. The requirement to submit two examination lapsed 24 hours after a person landed. But should a person manage to enter the United Kingdom without encountering an immigration officer, there were no obvious consequences and the person was not acting unlawfully in continuing to reside thereafter. When Commonwealth citizens — or British subjects, to use their original designation — began landing in small boats on the southern coast of England, this came to be seen as a loophole that needed to be closed. The 1968 Act duly introduced a more thorough system of control.