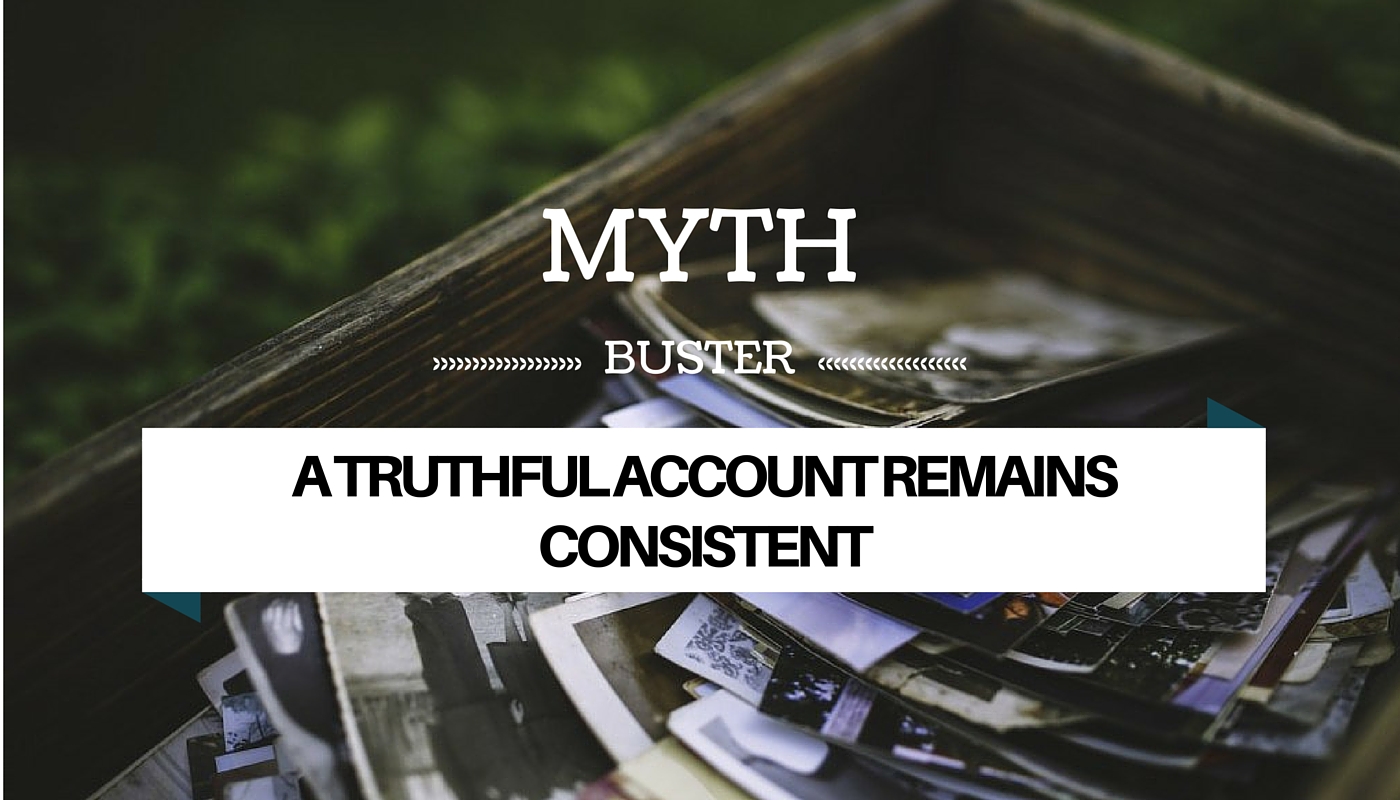 Why do we think this?

There’s an English phrase – “to keep your story straight”. If you can’t do this, the saying goes, you’re making it up. We used to think that memory was like taking a photograph, or a video-recording of an event.

What does the research show?

Memories are actively reconstructed each time they are recounted

As long ago as 1932, a memory scientist called Bartlett told a native American story to a group of British English participants. They then each had to tell it to another person. After 6 times of retelling it had changed – and significantly, some confusing (for a British person) details had been changed, as well as culture-specific terms such as ‘hunting seals’ being changed to ‘fishing’. The study, whilst old now, and limited in its design, is hailed as the first experimental demonstration of how people do not take a ‘snapshot’ of the story, but rather the gist of the story, which is then interpreted and reconstructed, fitting it into their own understanding of the world.

This is significant not only for the changes that may well occur when the account is (1) related by the asylum seeker, (2) translated by the interpreter and then (3) converted into a witness statement or heard and understood by a judge but also because every time we recount an incident from our own history we may well do it differently.

Modern research has gone on to show that each time we recall a past event we are not fetching out a stored memory, but we are reconstructing a memory of the event. Each time we do this we go over, or rehearse the details that we recall. Also this often happens in a social context, which may mean that we emphasise certain elements (for example if we want to show off) or even introduce new elements. Then the next reconstruction will be influenced by this – the details which are more frequently rehearsed than others, or the details which get a good reception from others may then become more available for the next reconstruction.

A study showing this asked participants to watch a disturbing film. Then a third of the group were asked to talk about what had happened, a third talked about their emotional responses to the film and a third did not talk about it at all. When their memories for the film were tested later, the group who had talked about their emotions gave more subjective accounts, remembered their emotions better, and made more serious errors in terms of questions about the events in the film, compared to those who had talked about what had happened (Marsh, Tversky & Hutson, 2005).

If we think about the impact this may have during the asylum process, it is not hard to see that those attempting to recall traumatic events which had a significant emotional impact may well struggle to recount the facts of that incident in which an asylum decision maker might be interested. On top of that, asylum seekers have to recount their history on multiple occasions – typically at screening, to their lawyer, at a full asylum interview, to their lawyer again and at an appeal – which is likely to reinforce distortions rather than reduce them.

When it comes to consistently reporting traumatic events there is a group of studies that shows alarming levels of inconsistency. Using checklists with returned US veterans (Southwick, 1997) Dutch soldiers (Engelhard et al., 2008) and refugees (Mollica et al., 2007), studies have found that people will change their reports of whether or not they experienced really quite significant events (e.g. being shot at, or seeing human remains). There is still no good explanation (or explanations) for why this is so, but it does seem to be happening (King & King, 2000).

Asylum decision makers are trained to reject an account that includes major inconsistencies of this nature; in fact for a significant but unknown proportion of genuine trauma survivors this is exactly the wrong conclusion to draw.

This was tested with people seeking asylum in a study which asked people with refugee status to recall one traumatic and one non traumatic experience (Herlihy, Scragg & Turner, 2002). They had refugee status through a programme so they had never had to go through the asylum process and had no particular motivation to lie to the researchers. They were all asked the same 15 questions about details of their memories (e.g. the day, the time, what happened before & after, the location, how they felt). After each question they rated the detail as Central or Peripheral. After a number of weeks (it ranged from 4 to 28) they were interviewed again, recalled the same two memories, and answered the same 15 questions on each.

The results of this study showed that about 30% of the details changed between the two interviews, regardless of whether the memory was non-traumatic or traumatic. However, the most change was in the peripheral details of the traumatic events. Details which people rated as peripheral to their experience were not remembered consistently from one interview to the next. Read the whole report of this study here. There’s a report of the same study written for the IRCT journal with a bit more background here.

It may be that being very consistent is only possible if we make careful efforts to remember the same story and repeat it exactly.

Granhag et al.(2003) recruited 20 pairs of friends to a study. On arrival 10 of the pairs were sent out to have lunch together. On their return these participants were told that they would be interrogated about their lunch. The other 10 were given 30 minutes to ‘make up an alibi’ of having had lunch together – on which they would be interrogated. All 40 participants were interrogated individually straightaway, and then again 1 week later. Analysing the transcripts of the interrogations, the researchers found that there were no significant differences in details changing or being forgotten between the ‘liars’ and the ‘truth-tellers’. However, the truth tellers were much more likely to have added more information at the second interrogation – demonstrating a common phenomenon known as ‘reminiscence’ – when we have more time to think over an event, we often start to remember more details.

So keeping your story straight may simply be an indication of a carefully rehearsed story that is being repeated. When we are doing our best to remember an event, we are reconstructing at every retelling and so details will necessarily change.

Of course at some points in the asylum system, where the stakes are high, you might well rehearse your true story.

What have we learned?

The psychological research is in stark contrast to the belief in asylum decision making that recalling a memory consistently means you are telling the truth.

The Centre for the Study of Emotion and Law undertakes and disseminates high quality psychological research to help inform and underpin legal decision making. Check us out at http://pc.rhul.ac.uk/sites/csel/.