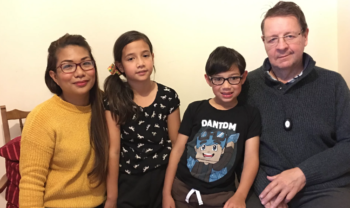 Home Office: a stroke is not “exceptional circumstances”

An ex-soldier who struggles to walk, speak or perform basic household tasks following a stroke has been told that he must look after his children without their Philippine national mother because these do not constitute “exceptional circumstances” in the eyes of the Home Office.

Simon and Leah Waterman returned to the UK from the Philippines in 2015 following the stroke. Mr Waterman is a British citizen, as are the couple’s two children.

Ms Waterman entered on a visit visa, and subsequently made a human rights application for further leave to remain. Her application was turned down on the basis of the initial overstay. Generally, a spouse in this position will have to leave the country and apply from abroad.

On the face of it, if a Home Office caseworker is following the official guidance documents, a person who does not meet the immigration status requirement does not even get as far as being considered under the paragraph EX exceptions.

However, in law there is always a discretion at the Home Office not to apply the Immigration Rules at all, although most caseworkers would probably be unaware of this and they are certainly not permitted to do this at a junior grade.

And there is another possibility: paragraph GEN.3.2 of Appendix FM, which was brought into the rules with effect from 10 August 2017. This paragraph is new and it provides that where an Appendix FM application is to be refused

the decision-maker must consider, on the basis of the information provided by the applicant, whether there are exceptional circumstances which would render refusal of entry clearance, or leave to enter or remain, a breach of Article 8 of the European Convention on Human Rights, because such refusal would result in unjustifiably harsh consequences for the applicant, their partner, a relevant child or another family member whose Article 8 rights it is evident from that information would be affected by a decision to refuse the application.

If ever there was a case that meets the definition of exceptional circumstances, this is it: a British citizen husband who has suffered a stroke resulting in weakness to his upper and lower limbs, severe expressive language difficulties and post-stroke epilepsy that leads to up three seizures a day of 30 minute durations.

Further, the couple have two children aged seven and ten years old, both British citizens, both attending school. The applicant Leah Waterman provides her husband with 24 hour support as well as looking after her children.

It would be devastating to the family to expect her to leave the UK and apply for entry clearance; the Secretary of State has a discretion in this case and one would expect such a discretion to be exercised with some compassion and humanity, as well as a dose of common sense as to the clear best interests to the children of keeping their mother in the UK.

Compassion and common sense are in short supply at the Home Office. The application was considered under paragraph GEN.3.2 – but still denied. Ms Waterman was told that:

Medical professionals have written to the Home Office, stating in unequivocal terms that Mr Waterman is not “not medically fit to look after himself or his children” as a result of the stroke. An occupational therapist for the local authority writes that

he is not able to assist with their personal care or prepare meals for them, is not able to walk to school with them, and cannot communicate face to face or by telephone with school, doctors, etc.

Another therapist reports that:

Mr Waterman also has marked Aphasia. This means that he is unable to communicate his needs or the needs of his children verbally or non-verbally. He is unable to write. He would not be able to summon help in an emergency or respond to his children’s needs. He also has receptive dysphasia meaning that he is not able to follow commands or understand questions put to him on a number of occasions.

This disability alone would make him unsafe to be left responsible for his two children as well as putting himself at risk as a vulnerable adult.

As also reported in the Guardian, an appeal is underway. We hope that there will better news to report once that appeal is concluded. It is lamentable that it is even necessary.